In September of 2016, author/speaker John Serpa spoke at the grand opening of Prysm’s new Customer Experience Center at the company’s headquarters in San Jose, CA. This article is a recap of his presentation, which you can watch here.

You may never have given much thought to how information presentation influences the way we think or how it can catalyze innovation.

The following is an example that might change the way you think about these issues.

In 1986, the Space Shuttle Challenger exploded, causing the tragic deaths of seven individuals—including the first civilian in space, Christa McAuliffe. The cause? Some simple O-rings.

What’s less publicized, however, is that the presentation of data played a major role in the disaster.

On the day of the launch, the weather was an icy 31˚F. NASA had never launched the Shuttle in temperatures lower than 51˚F. NASA scientists gathered to talk through the issue.

The scientists presented a slideshow of the data—very linear and difficult to understand—showing that the cold could stiffen the O-rings that sealed the joints of the fuel tank, preventing them from sealing correctly. After watching the confusing presentation, Morton Thiokol, the builder of the solid-rocket boosters, advised NASA that the O-rings should perform adequately in the cold. The rest was history.

There was nothing wrong with the scientists’ data—it was correct. Ego played no part in the decision, either. It was the way the data was communicated.

Humans have a hard time understanding and processing data when it is presented in a sequential fashion, like the slideshow on that fateful day. Ironically, most of the companies I work with do things much the same way. Let’s refer to this as “Business 1.0.”

After the Challenger disaster, NASA conducted a thorough investigation. The organization brought in Edward Tufte, an American statistician famed for visual ways of displaying quantitative information, to represent the data in a new way. He created an easy-to-understand diagram, illustrating that in freezing weather, the O-rings would have a 100% failure rate. If the data had originally been presented in this fashion, the Shuttle would never have been launched.

To understand the situation more thoroughly, let’s consider an Italian study of the rhesus macaque (Macaca mulatta) monkeys. In the experiment, neuroscientists stood in front of the monkeys, manipulating peanuts. The monkeys were passive observers and didn’t react. At the same time, the neuroscientists were measuring the monkeys’ brain function. They found that the monkeys’ neurons were firing in the exact same way as if they, themselves, were manipulating the peanuts.

The cause? Mirror neurons. The scientists concluded that when the monkeys (whose brains closely resemble humans’) observed the activity in a spatial/kinetic (as opposed to linear) fashion, their neurons replicated the function of those who were carrying out the activity themselves.

Another interesting example is the work of psychologist Paul Ekman, who is a pioneer in the study of emotions and their relationship to human expressions. For 50 years, Ekman (nicknamed “the best human lie detector in the world”) studied and codified every expression of the human face. He found that these expressions could predict what people were thinking, whether they were lying, etc.

Ekman’s research found that if one person smiles, the person they are smiling at will smile back. If that person smiles at another, soon, everyone is smiling. It’s those mirror neurons again.

So, he postulated, if a presenter is smiling at their audience and interacting in a spatial—not linear—fashion, it gets everyone on the same page and they are better able to solve problems and come up with better solutions. It’s the best way to leverage the brain, from a neuroscientific and behavioral perspective. This technique is what I call Business 2.0.

Your brain is just two percent of your body weight but uses 30% of your caloric intake. What’s more, our brains reach maturity at age 25, after which they begin to decline, shedding 90,000 brain cells a day. Evidence shows that you can mitigate this decline in a number of ways: by losing weight, sleeping at least seven hours a night, and eating a healthy diet, for example. Other things that slow brain-function decline are learning and having face-to-face interactions with others—solving problems, brainstorming, and so on. Essentially, science has shown that face-to-face (spatial) interaction can make you smarter and sharper as you get older.

Now, what if we united these scientific findings with technology?

Again, most of the companies I work with present information sequentially—flipping slides and not interacting with the participants in their meetings—Business 1.0. And remember the NASA example, where there was nothing wrong with the data itself, just in the way it was presented. Business 1.0 again.

But what if we began to interact with data in a spatial format, and how could we accomplish that?

Prysm is about taking the technology that we need and presenting it in the way we need it. In the frenetic pace of information flow, Prysm leverages the human brain—getting all those synapses working and engaging the millions of neural junctions inside your head.

If you put this all together, you’ve got something really, really awesome.

John Serpa is an author and motivational speaker whose educational background includes undergraduate degrees in biology, organizational management, and an MBA from The Johns Hopkins Carey Business School. He has also worked in management roles for such companies as Glaxo SmithKline, Boehringer Ingelheim, Johnson & Johnson, Wyeth, Biogen-Idec, Novartis, Gilead Sciences, and several others. Serpa’s book, “Link: The Fascinating Ways Our Minds Connect,” is available from Amazon in both Kindle and paperback formats, as well as in paperback and Nook format from Barnes and Noble. His new book, “Tethered: Reclaiming Human Interaction in a Mobile Device Addicted World,” is scheduled to be published by the end of 2016. 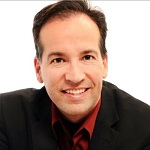 John Serpa
Find me on:
LinkedIn
Blog Home
← Previous
Next →